Bernie and the Wizards

A humorous fantasy about a young god whose job is fixing broken universes. Bernie is different from other gods, who tend to take a hell-fire-and-brimstone approach to problem-solving.

Our young hero has the misguided notion that life - even if it was created by the gods - is important and shouldn’t just be sniffed out...

Even if it’s the life of a murderous wizard bent on destroying anyone who opposes him.

Book Reviewers: FREE
About the Book

The new book begins where Bernie and the Putty (book #1) left off.  The new book stars young Bernie as he begins his career as a troubleshooter.  When a defective universe is found, Bernie is called in to fix it.  This isn’t as easy as it may sound. As you know, Bernie isn’t one of those hell-fire-and-brimstone gods who just smites anything that gets in his way. He happens to hold the quaint idea that life is sacred, and it makes his job much harder when he tries not to hurt anyone. 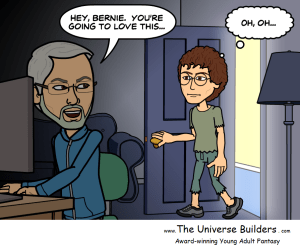 The first assignment is a world called Photox where the people work to produce guid-peppers, an expensive delicacy among the gods.  For some unknown reason, they are no longer producing the peppers.  Bernie’s assignment is to figure out the problem and fix it.  No matter what.

Other Books in "The Universe Builders"

Bernie and the Putty

Bernie and the Lost Girl

Bernie and the Time Lords

Bernie and the Fight
Look Inside